The year 1998. My book “Designing Identity” has just come out. Robb Moss is in Austin to serve on the jury for the Texas Filmmaker Production Fund, to decide who gets awarded funding. When I last saw Robb, who was a film professor at Harvard, he was most likely whipping a ball to me, from shortstop to my position at second base, as I’d played softball at MIT for 13 seasons. Now in Austin, I attend the screening of his film “Riverdogs,” and offer him a copy of my book. He invites me to join him for dinner, along with AFS founder Rick Linklater, and executive director Rebecca Campbell. Of course I am aware of both Linklater and AFS from my days in Boston, as I’m a film guy who keep his ear to the ground.

Later I get a call from Campbell: “Would you design our logo?”

“No. But I’ll do your entire identity and all other materials, though only if you put me on the board of directors.” At that point I understood the value of doing free or “pro bono” work and balancing it out with sitting around the table with the actual decision-makers.

When the Austin Film Society took over the old Austin airport hangars, that paved the way for Austin Studios, The Texas Film Hall of Fame, for which we did all aspects of branding. Somewhere in between, we ended up working QT Fest, otherwise known as the Quentin Tarantino Film Fest. Yes, I’ve an amusing QT hot-tub story.

When I stepped down from the board in 2007, at the thank-you dinner Rick said “Marc, you took us from Kansas to Oz.” Kind words from a kind man, we continued to do work for the Austin Film Society till 2012, when it was time to go on a long motorcycle trip and re-prioritize.

The 88-page book features a rich timeline of AFS memorabilia, photos from its many premieres, parties and special events, and memories from the people that helped make the Austin Film Society a one-of-a-kind organization. The book features a dust jacket/poster that lists every film AFS has ever shown.

Back in 1994, QT — Quentin Tarantino — came to Austin at director Richard Linklater’s suggestion to premiere Pulp Fiction as a benefit for the Austin Film Society. In 1997 Tarantino, looking to share his vast personal collection of obscure classics (not the oxymoron you think it is), B-movies, and grind-house exploitation flicks, in conjunction with AFS, starts the QT Fest. Theme oriented nights (vampire lesbian, Italian WWII, spaghetti westerns, revenge, horror, etc) run for a week, culminating in the marathon Saturday night screening that starts at 8pm and ends at 9am or so. Nothing better than walking out of a movie theatre on Sunday morn, after a night of Tarantino’s rambling, but spot-on commentary, and hand-picked films, to then have to put on a pair of sunglasses to adjust to the brilliant morning light and drive home to sleep as the churchgoers are dawning their sunglasses, to go to their house of worship. Amen.

No matter how you spell it, film is where it’s at. We’ve been telling stories around the campfire as long as there has been a campfire, and film is the modern-day medium. Since its inception in 1985, the Austin Film Society has shown the best of cinema from around the world, sharing the visions of storytellers world-wide. The T-shirt for the Essential Cinema series gives a nod to the rest of the world’s cinematic efforts. The farsi lettering came direct from Teheran, at our request, and the Arabic from Qatar. The remainder of the lettering from our colleagues as well as associates here at the studio. 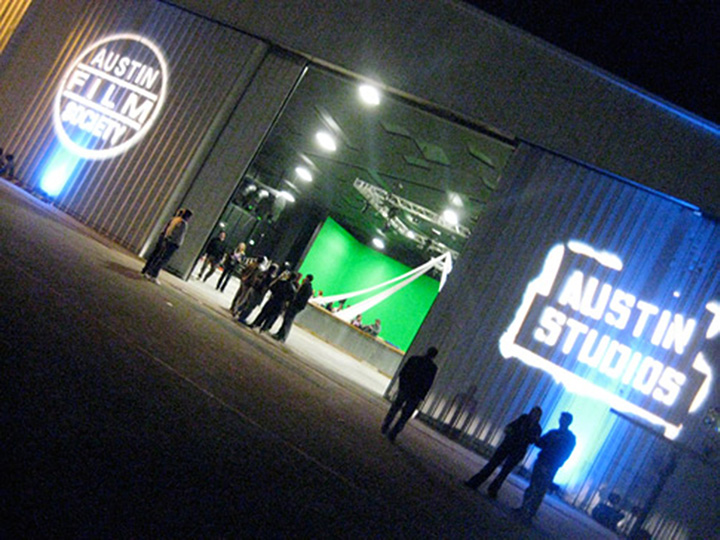 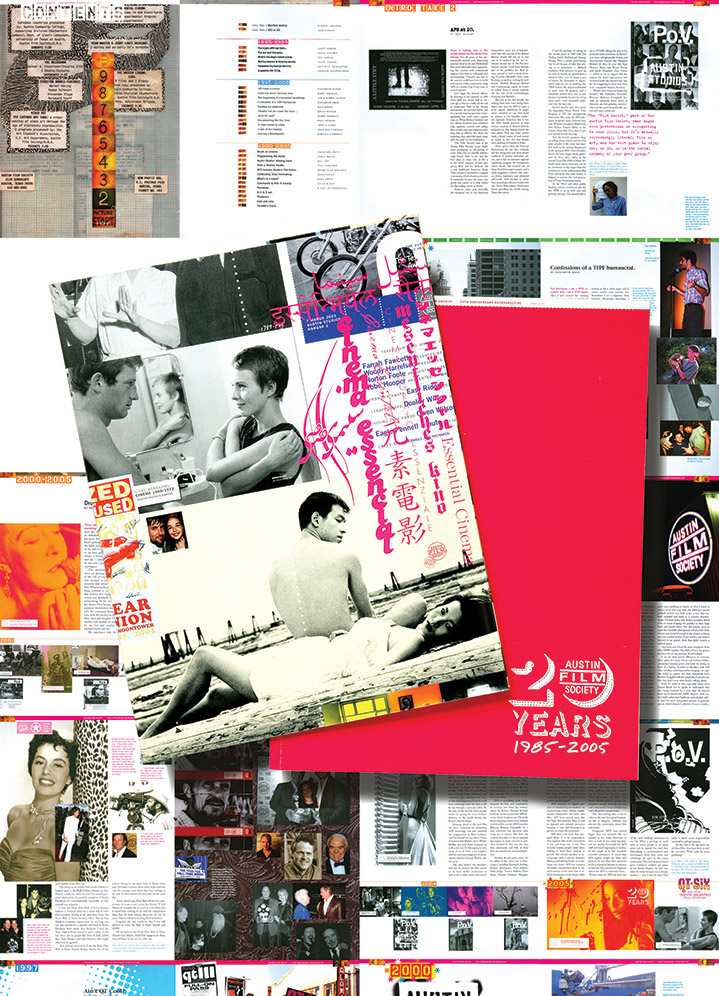 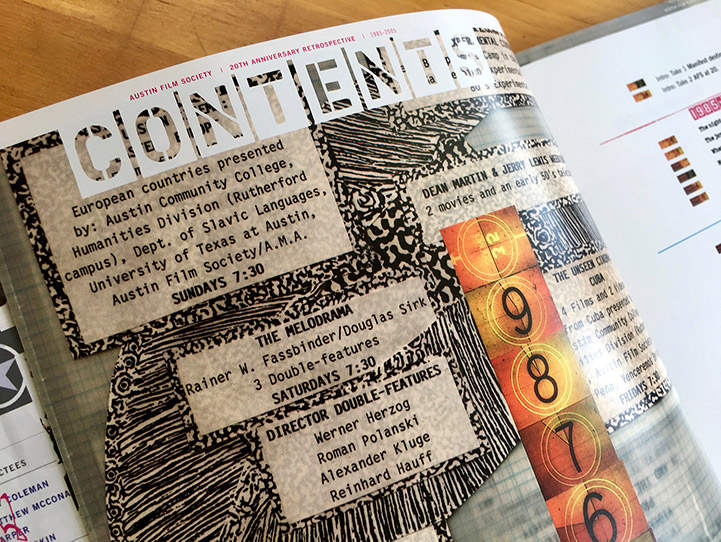 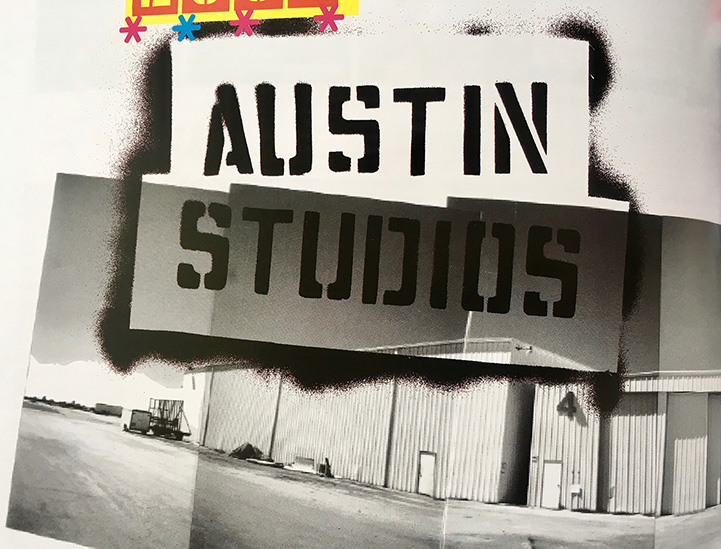 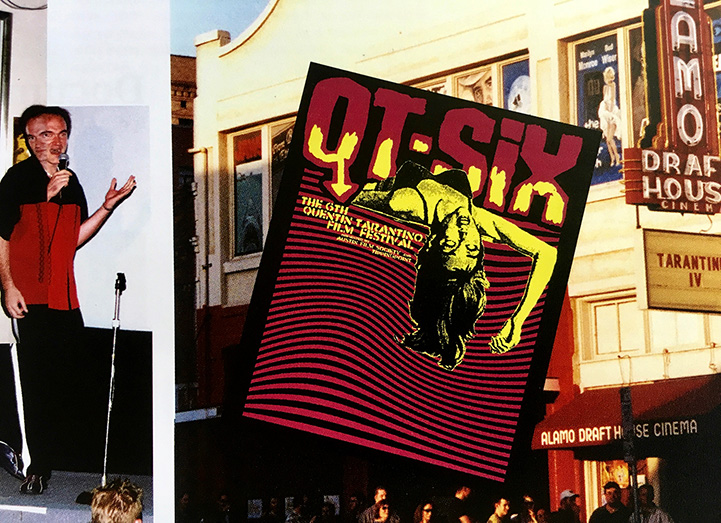 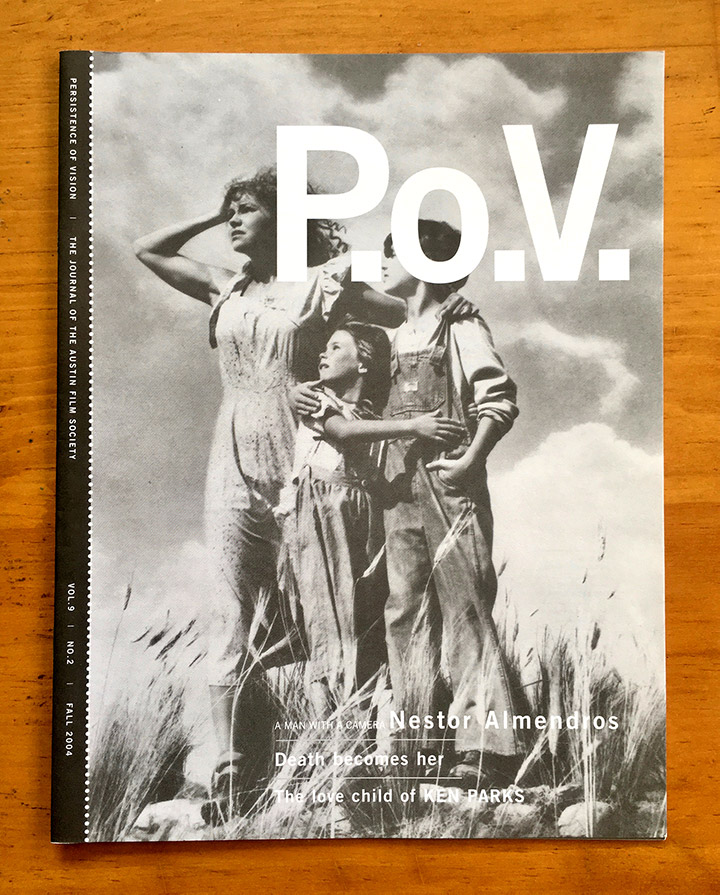 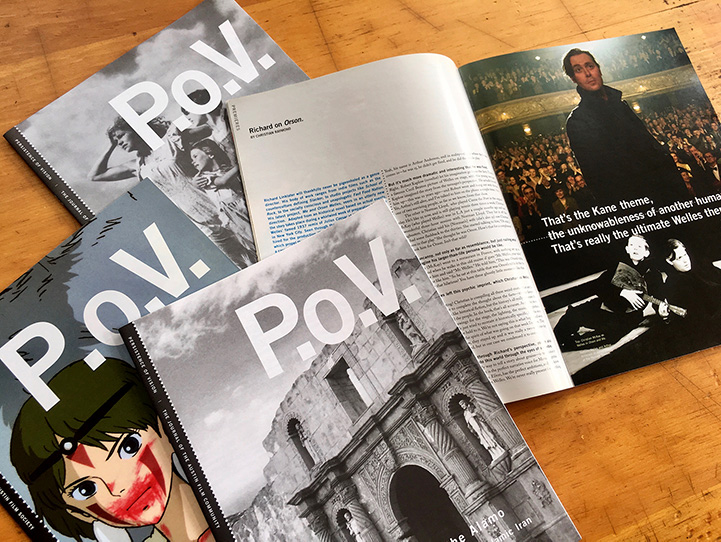 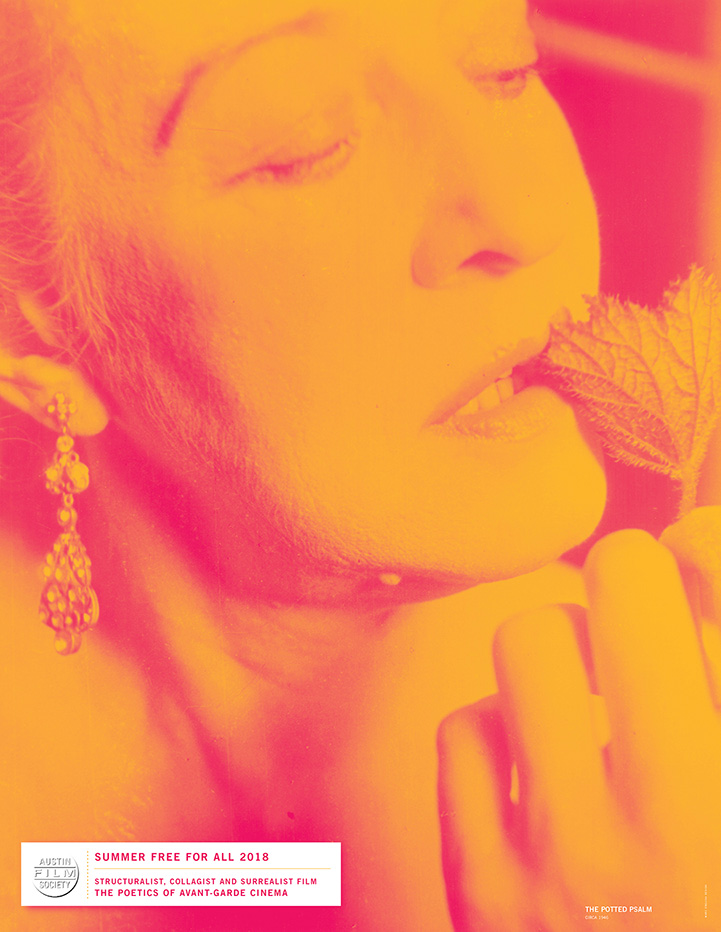 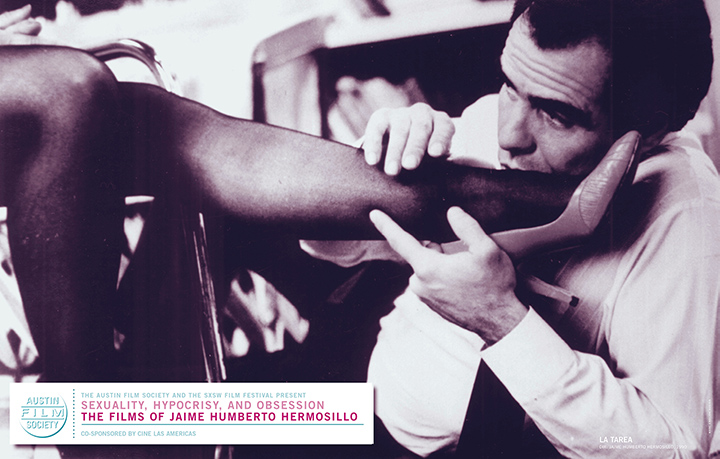 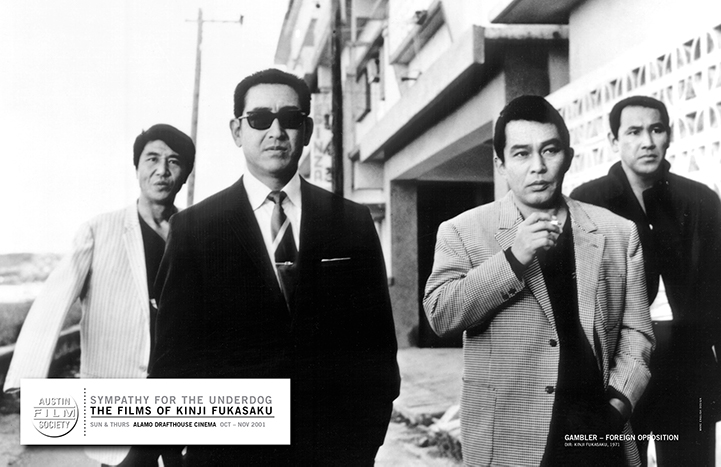 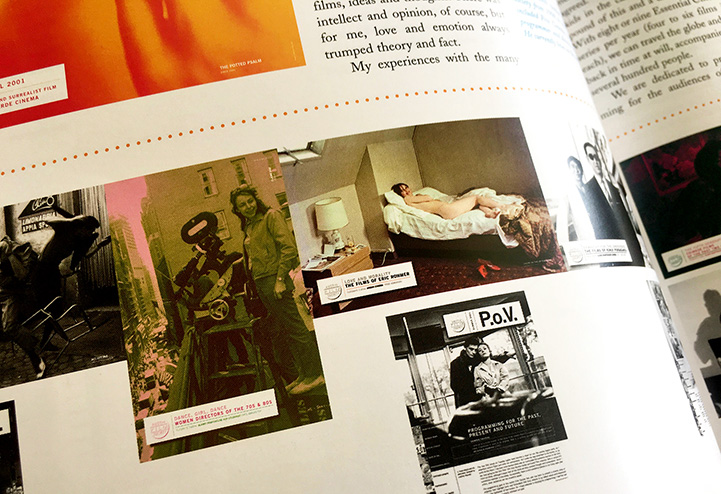 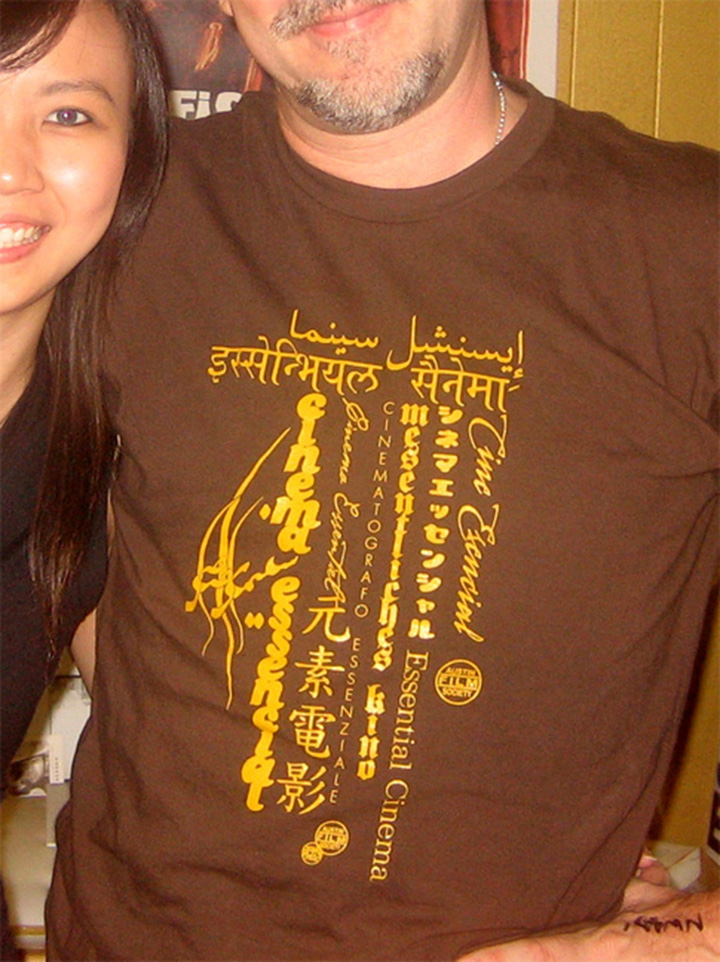 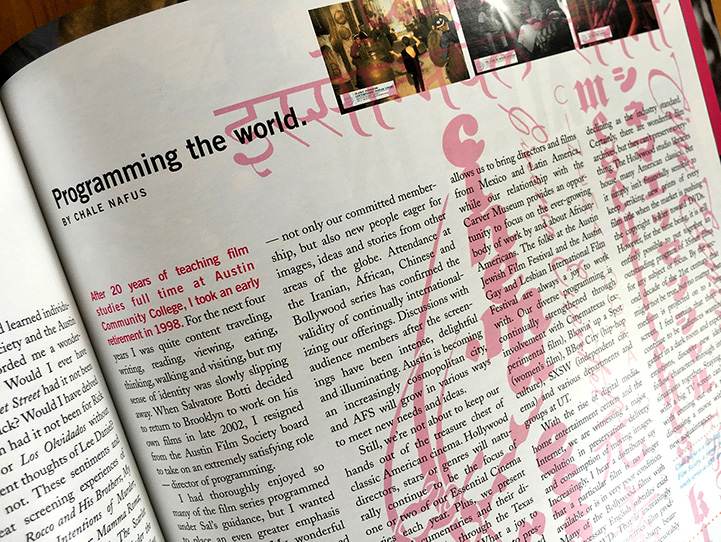 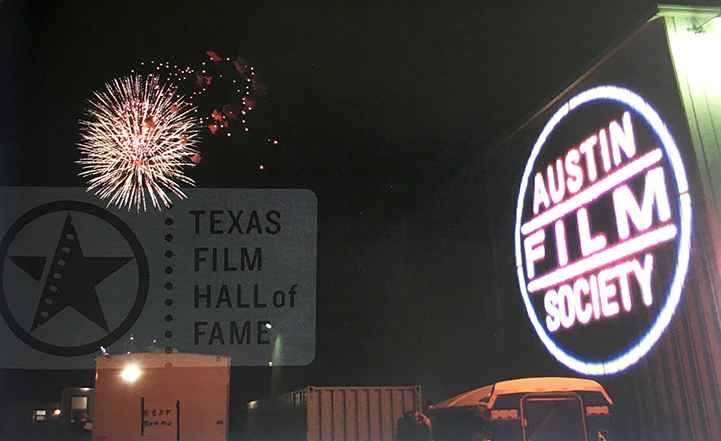 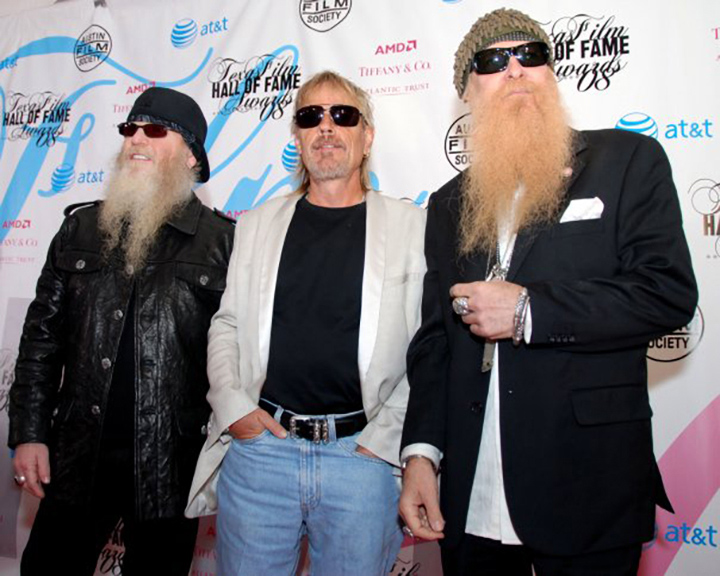 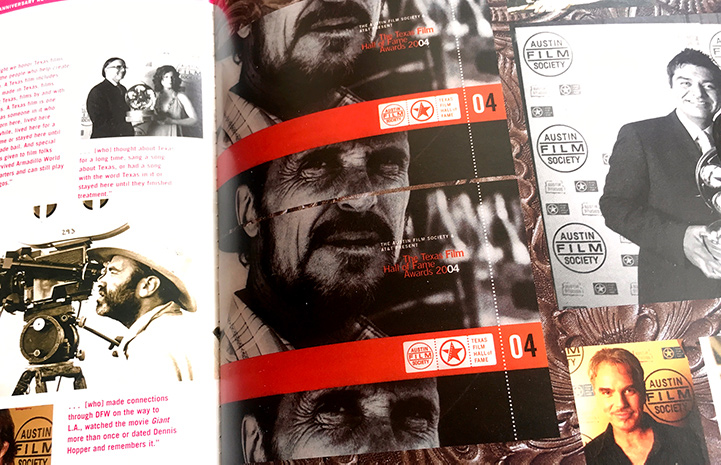 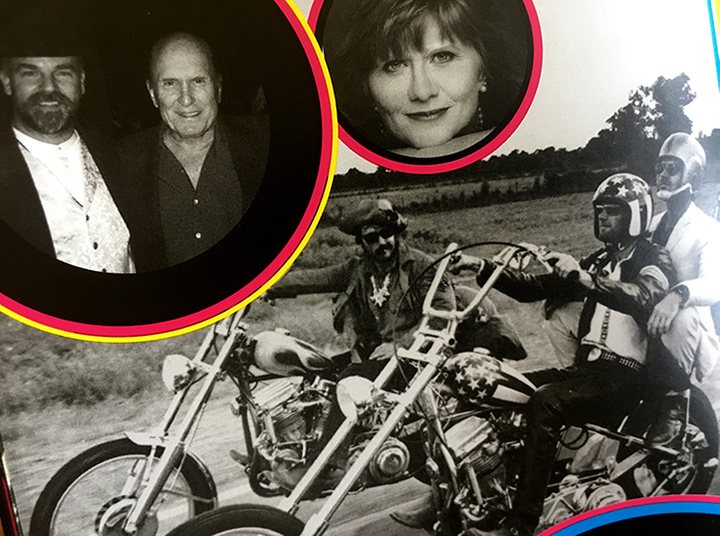 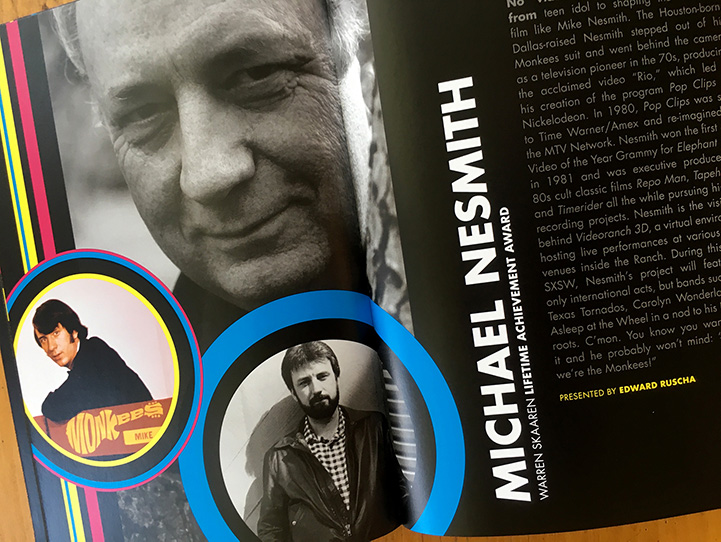 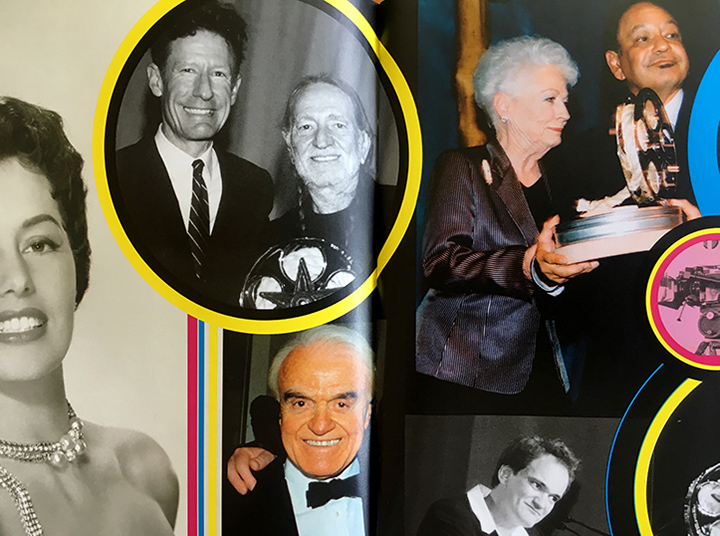 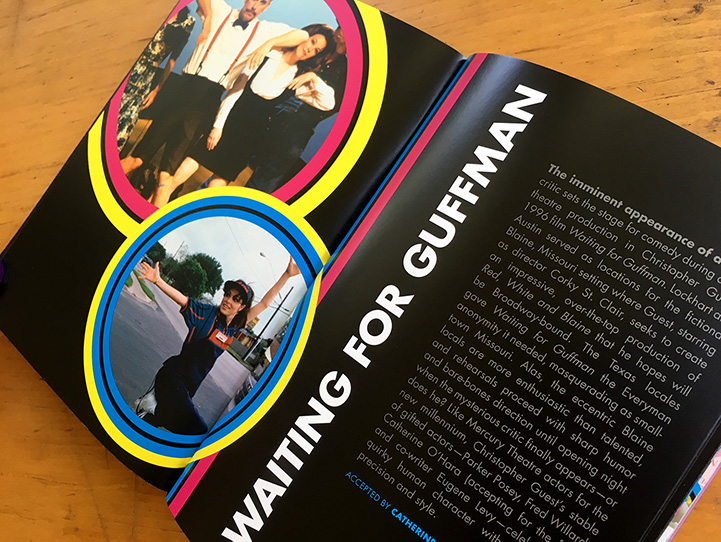 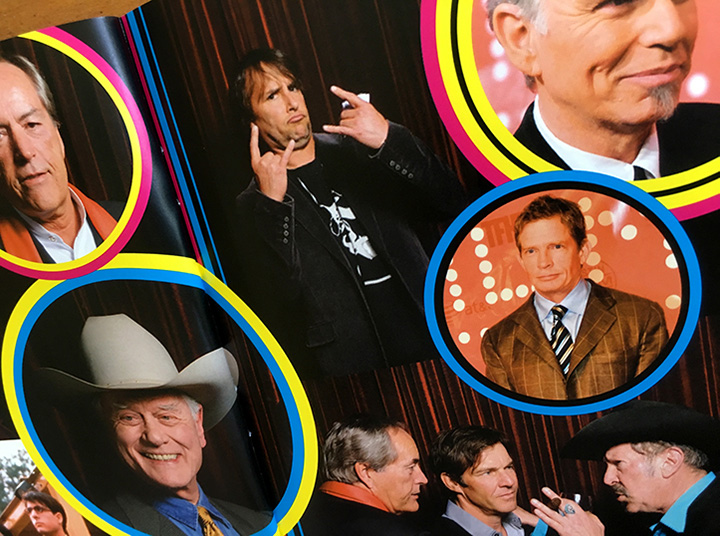 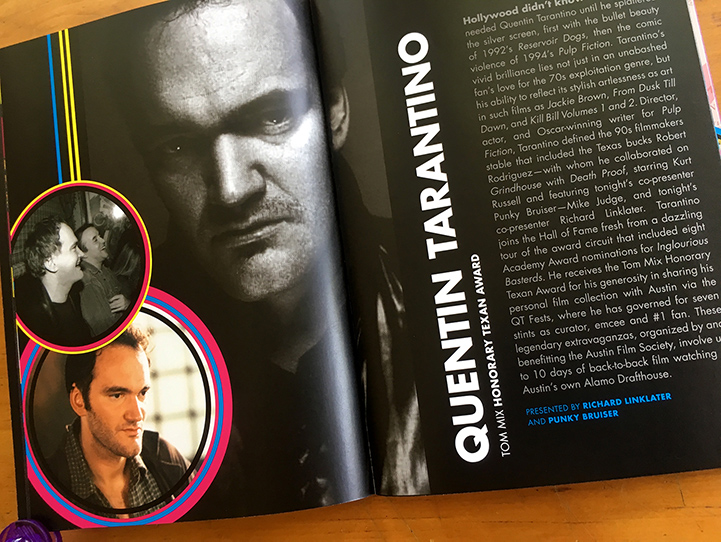 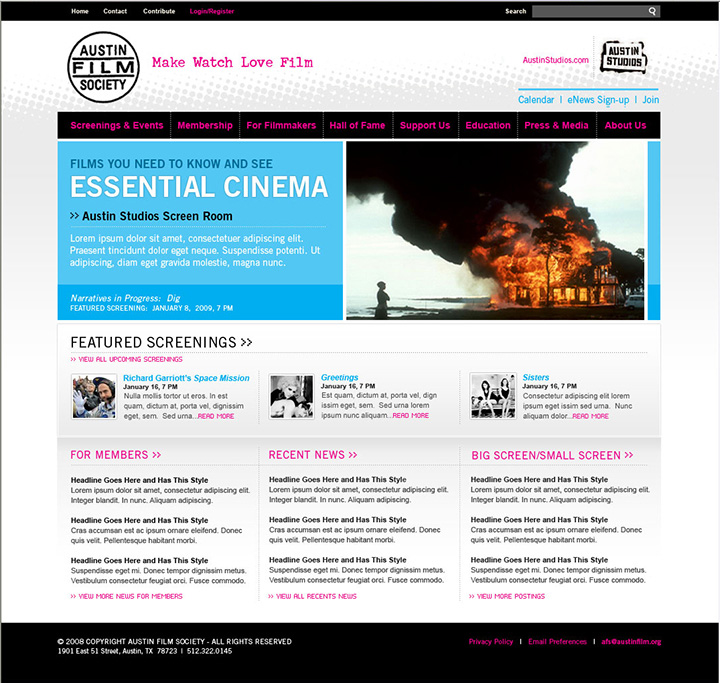 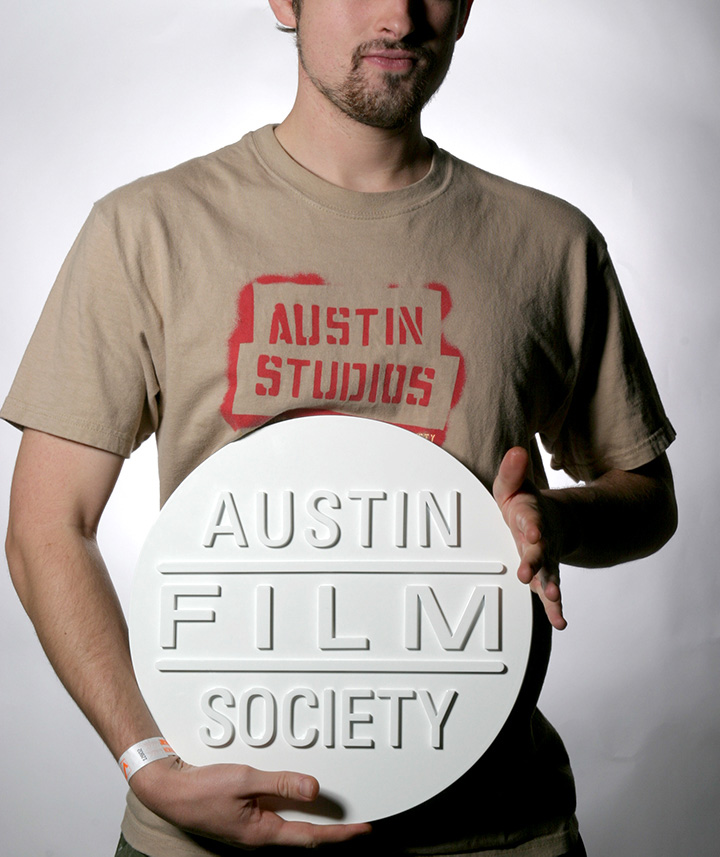 “Marc English Design succeeded in re-creating our corporate identity where others tried and failed for over a year. It’s tough coming up with an image that communicates “film” without the clichéd images of film strip, reel, projector; and one that communicates “Austin” without the clichéd river, bridge, hills; but Marc English Design never got bogged down by unoriginal thinking. Our new logo seemed to emerge naturally, after they listened carefully to our staff and board, and took time to experience our activities and understand us. The result was a logo that captured and reflected our essence — the beauty of light through celluloid — without constricting our business possibilities. Because of their talent, commitment and fearlessness, I firmly believe they can handle the needs of any enterprise, from the humblest to the grandest.”